University of Illinois at
Urbana-Champaign

360 degree attitude control of satellites is an aerospace technology that allows satellites and spacecraft to achieve arbitrarily large (360°+) rotations in a low- and no-atmosphere environment. This hardware technology achieves attitude adjustment without the use of a consumable propellant or constantly spinning flywheels. Use of propellant exacerbates jitter interferes with satellite function, while spinning flywheels requires failure-prone sliding contacts.

The invention instead features variable-length appendages that utilize transverse oscillations and moment of inertia adjustments to achieve both fine and arbitrarily large rotations. By lengthening the appendage for an “up-stroke” and shortening it for the “down-stroke,” an angular momentum differential is created to allow the satellite or spacecraft to return to its original position/state, but reoriented in a different direction (with respect to a static “space” frame of reference). Repeating the “strokes” allows for arbitrarily large net rotations. The technology was presented at the ASME Conference in September 2019. 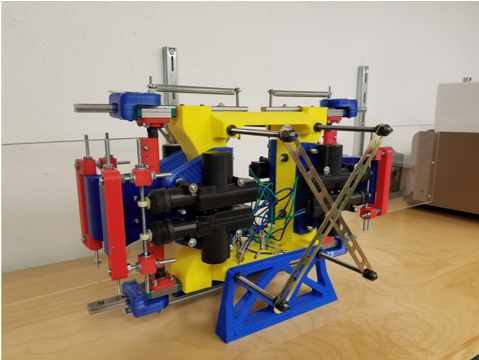 This rotational mechanism for attitude control is repeated as many times as necessary to achieve the desired orientation.