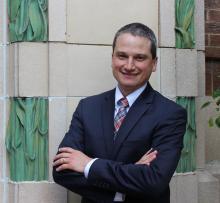 Nathan Hoffmann has been appointed as the director of the Office of Technology Management; he had been serving as the interim director since July 2016. Of Hoffmann’s appointment, Vice President for Economic Development and Innovation Edward Seidel states, “His leadership this past year has been invaluable and I know he will continue to lead the Office of Technology Management in the right direction.”

Hoffmann joined the office as a technology manager in 2008, taking on the responsibilities of assistant director in 2013, and later of associate director. During his time in these roles, he managed a portfolio of engineering technologies, with a focus on material science.

Prior to joining the Office of Technology Management, Hoffmann was a training specialist in the Cybersecurity Directorate at the National Center for Supercomputing Applications (NCSA). He is a United States Navy Veteran and served as a Nuclear Submarine Warfare Officer for seven years.

Hoffmann is a member of the Association of University Technology Managers and of the Licensing Executives Society. He has spoken at professional meetings and has served on special committees focused on improving the efficiency of transactions across academic institutions.

In the last ten years, the Office of Technology Management has executed more than 425 licenses & options, including 69 licenses to start-up companies founded on University intellectual property (IP). In that same time period, the Office received 2,076 new invention disclosures, and 677 U.S. patents issued. Recent initiatives include the Illinois Proof-of-Concept and Ready-to-Sign programs.